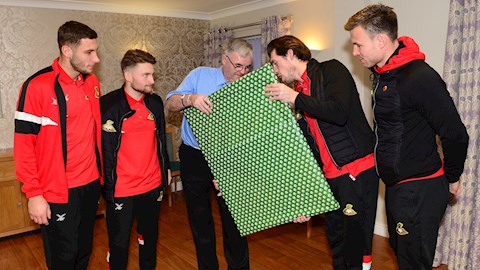 Phil is a lifelong Rovers fan and has assisted the club as a matchday photographer since the Belle Vue days.

He was presented with a framed shirt signed by players and staff in recognition of his contribution to the club.

Rovers chief executive Gavin Baldwin said: “Phil is loved by everyone at the club, he rarely misses a game and is a regular down at the training ground.

“He can be very proud of the contribution he makes to Doncaster Rovers and I am glad he had such a good time at his birthday party.”

Andy Butler, John Marquis, Alfie May and Marko Marosi represented the first-team squad at the event.

Club captain Butler said: “The lads love Phil to bits, he comes down to Cantley Park most weeks and has such a great attitude to life.

“He gets some brilliant photos of the lads and is a really important part of why Rovers is such a fantastic place to be.”

Rovers are in action at Keepmoat Stadium on Saturday January 19. Tickets can be purchased online by clicking here, in person at the Club Doncaster Box Office or by phoning 01302 762576