Kieran Sadlier believes his hard work is about to pay off as he readies himself for Rovers action. 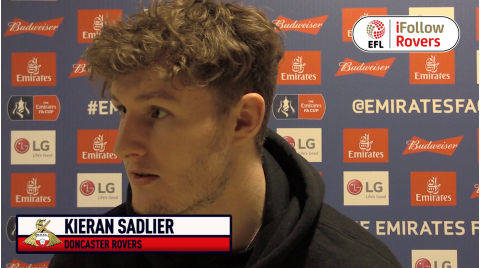 Sadlier started his career at West Ham but left the London club after 10 years for St Mirren before earning a more to Peterborough where he worked with Grant McCann. In 2016, the winger moved to Ireland to pursue a new start.

“I’ve worked hard and gone about it the hard way spending three years in Ireland but I’m back now and hopefully I can prove that I can play at this level,” he said.

“It’s quite hard to say what the difference is between League of Ireland and the EFL. There are almost two halves of the table there, there are teams who play in Europe but then there are other teams who might struggle in League One.

“The standard over here is higher, there are less mistakes and the intensity is much higher. There are better facilities generally but in Ireland I played in Champions League and Europa League.”

Sadlier also has international experience playing for the Republic of Ireland at U17, U19, and U21 level and while he would like to make his full debut in the future, he says his focus is on Rovers.

“There are some good players here who’ve played at good levels and I’ll take things and learn things from them that are going to help me.”