Tyler Smith cannot wait to get started after agreeing a loan deal from Sheffield United. 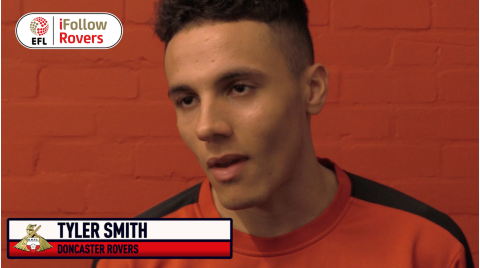 The striker impressed in the first half of the season hitting 10 goals for Vanarama National League side Barrow but has said he is ready to test himself in Sky Bet League One.

“I’m absolutely delighted to be here. I’ve been following the club and they play some great football. Good fans, good crowd, I just can’t wait to get started,” he said.

“As a team, Rovers are striving forward, they’ve created a lot of chances and win a lot of games so why wouldn’t I want to be involved?

“I played in the conference with Barrow and I did well there but I think it's time to step it up.  My aim is to help push for promotion, get as many games as I can and as many goals as I can.  It’s a good group of lads and I think we can get up there.”

The 20-year-old forward faces some tough competition to break into the first team but he says he’s looking forward to the challenge.

“I want to be competitive, I want to fight for my shirt and I believe I’m good enough to do so.

“The manager’s told me I can play down the middle or on the wing and he’s just told me to express myself and continue what I was doing at Barrow.”

Rovers return to the Keepmoat Stadium to take on Burton Albion on Saturday 19 January, with tickets available from tickets.clubdoncaster.co.uk.