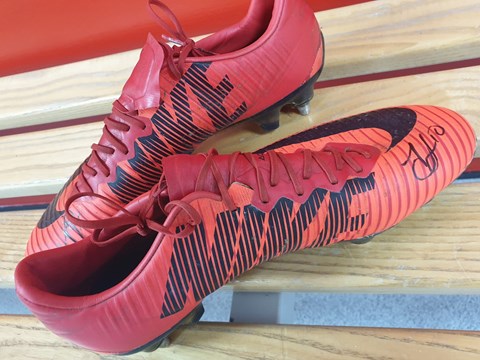 Downing arrived at the Keepmoat Stadium on loan from Blackburn Rovers in January and in his six months at the club played a vital role in helping Rovers achieve a place in the play-offs. He was also a key part of the resolute defensive performance put in by the team against Charlton Athletic at The Valley.

The auction will begin at 8pm, Tuesday July 2 and finish at 8pm, July 7 with all money raised (excluding eBay listing costs) going to Mind.  Also up for auction is a pair of signed Tommy Rowe boots.

Mind is the official charity partner of the EFL with all 72 EFL clubs working to raise funds and awareness for the mental health charity.  As part of the fundraising, staff from all EFL clubs are trekking the peak district to raise funds.

Club Doncaster will be taking part in the trek with Mary Lally, Laura Hemstock, Sophie Scargill, Kellie Whitehead, and Kirsty Cavanagh braving the elements and testing their toughness to complete the 12-hour overnight endurance challenge. If you would like to donate to them directly, click here.