Lirak Hasani says the focus is to keep improving after signing his first professional deal with Rovers. 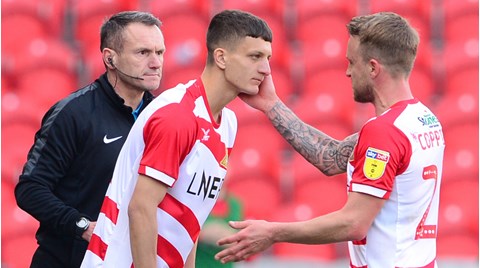 The midfielder made two substitute appearances towards the end of last season, and says that gave him the motivation to work even harder.

He said: “It is what I’ve been striving for since I came here at the age of 11, I’m really pleased to sign my first deal and now it’s about kicking on.

“I see it as the first step in my journey here, I’ll be giving everything now to put my mark on the club.

“It’s a proud moment for myself and my family, my mum and dad have always supported me with everything.

After being around the first-team for several months, Hasani believes that will benefit him in pushing for a regular place in the matchday squad.

He added: “It was a great experience and it made me want more, I want to test myself against other teams.

“It’s given me an experience of playing against people a lot older than me, and I take that with me in every game I play.

“There are so many players at this club that I can learn from, Ben Whiteman and James Coppinger have been really good with me.”

The 2019/20 season is nearly upon us. Back Rovers in their first match against Gillingham FC - click here to purcahse tickets online.