Darren Moore has had less than a week with the Rovers’ team, but he’s already impressed by the togetherness of the squad. 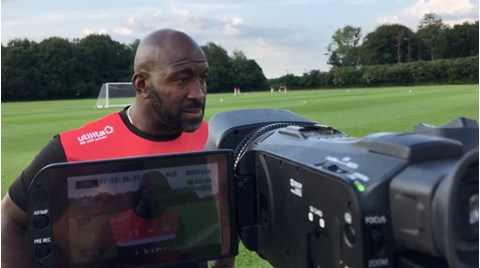 Tuesday’s pre-season match against Halifax Town was Moore’s second opportunity to watch the side and he was pleased with the desire shown.

“It was really good to see the boys have a workout today,” he said.

“It gives me a good understanding of the players, their strengths and weaknesses, the balance of the team. The appetite and desire of the boys is first class.

“These early days have been looking at the squad, understanding the players and implementing one or two training ideas to see how they take to it. They’ve been excellent. I love the bond and the camaraderie that they have here and I like the honesty that they share. They’re good intelligent players but to get ready for the start of the season, there’s more work to be done and the game against Halifax was part of that.”

The match against Halifax Town was moved from The Shay to a behind closed doors friendly at Cantley Park at the last minute due to problems with the pitch. Moore was quick to praise those who had helped ensure the game went ahead.

“It was unfortunate that we couldn’t play up at The Shay. The pitch wasn’t quite ready so we had to change the location at the eleventh hour but we got the game on and got the workout which is what we really wanted,” he said.

“Obviously, in pre-season you want the environment and atmosphere from a stadium for the phycological point of view. You’ve still got to go out there and put the same principals in because what you don’t want is for it to become a training ground practice, you need that edge to it. I thought both teams had that, and the work rate was really good.

“Most of the boys got 60 or 70 minutes in their legs so you can’t really knock that, it’s all good preparation for the start of the season. We’ve had a good workout and the players will have benefited from it so we’re grateful to Halifax for bringing their team down to us.”

Season Memberships can be purchased from the Club Doncaster Box Office, by phoning 01302 762576, or online at tickets.clubdoncaster.co.uk