Kieran Sadlier is looking forward to his first full season at Rovers after finally getting a well-earned break over the summer. 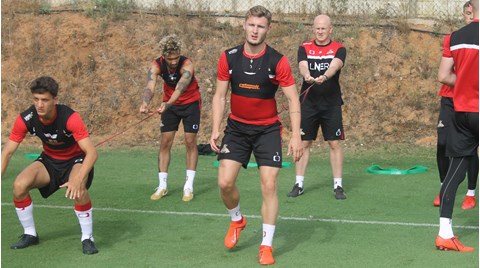 4 July 2019
Sadlier had played 18 months of football after completing a full season with Cork City - who compete in the summer League Of Ireland - before switching to the English game with a move to the Keepmoat Stadium.
He said: “I had four weeks and went on holiday, I didn’t do anything until the end of that time. I’ve come back and fitter than I thought and with a good pre-season behind me I am raring to go.
“Obviously 18 months with no break is a long time and shouldn’t really happen, and we went on a bit longer with the play-offs. This is my first pre-season at the club and I’m really looking forward to getting back on it for the new season.”
Sadlier is part of the Rovers squad at La Manga Club in Spain for a training camp ahead of the first friendly at Rossington Main on Tuesday night.
He added: “I’m enjoying it, it’s a bit harder when you’re running in the heat so you get more out of it. You see the benefits in the second half of the season, it’s those who put the graft in now who come out best in the end.”
2019/20 season tickets are on sale now! You can purchase them online from tickets.clubdoncaster.co.uk, in person at the Club Doncaster Box Office or by phoning (01302) 762 576