Ben Whiteman is looking to pass on his experiences from Rovers’ play-off campaign in 2018/19 to the younger players this season. 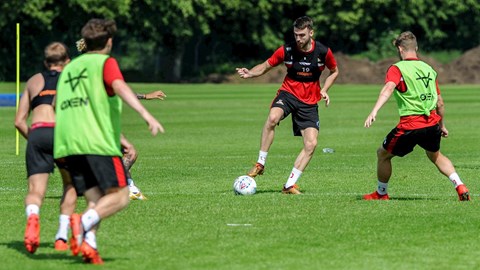 iFollow Rovers freeview | Whiteman ready to be a leader

Whiteman was a key figure in the club’s push towards the play-off semi-finals, all vital experience which he takes forward into the new campaign.

He said: “With the way last season went I played a lot of games, we were all hurting after that semi-final but it’s all knowledge for us.

“There are older pros like Copps and Blairy who have played a lot of games too, but last year was good for me and I’m definitely looking to take on more of a leadership role.”

The midfielder joins his team-mates in heading to La Manga on Monday for a five-day training camp which will see the players put through their paces in warm weather training as well as team-building exercises.

Whiteman added: “It’s a lovely place to get away with the lads, it’ll be a tough week but it’s about building relationships up and being able to hit the ground running come the opening day of the season.

“Pre-season is tough, but it’s been good to see all the lads again. It’s tough physically and mentally, but there’s a lot of team-bonding as well at this point which  shows over Christmas time when there’s a lot of games and towards the end of the season.”