Danny Andrew is looking forward to putting the past behind him when Rovers travel to face AFC Wimbledon on Saturday in Sky Bet League One. 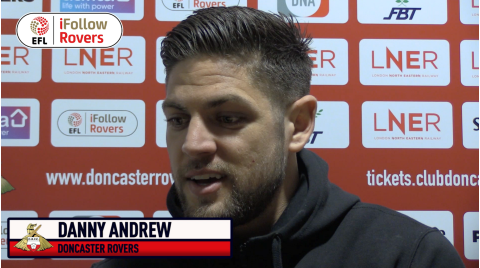 Last season’s trip to Kingsmeadow saw Andrew pick up a season-ending knee injury just six games into his Rovers career but, with the injury now behind him, says he is just eager to aid the club's promotion push.

“I didn’t really think too much about it when it happened at the time, my knee was in bits when it happened, so I knew there was an injury there, but it wasn’t until the Monday after where I got the scan back and it said that my season was over which was a big shock,” he said.

“We’ve obviously played them earlier on in the season which was a little reminder of what happened last year against them, but it’s a new test for me going down there to where my season ended really last time.

“I’d played 90 minutes down there, I got the injury inside the first 10 minutes and I had a great chance to score myself, but I’m past it now and I’m always going to give 100% and I won’t hold back from anything.”

Rovers came from behind to beat the Dons when the two sides met at the Keepmoat Stadium in November, and Andrew is keen to see Rovers start strongly in order to aid their hopes of cementing a top six finish in the league.

“We’re hoping we can get an early goal and then kick on from there, we’re all fully focused on getting into the top six, all across the team the aim is promotion and that is what we’re fighting for really,” he added,

“We have to take each game as it comes now, and that continues on Saturday, we want to be picking up the three points after the last three games where we haven’t been able to do so, we want to make sure we stay in that top six.

“You have to have the belief that you are good enough to compete for those top places, even when we’ve beaten other teams like Preston in the FA Cup, we’ve shown that we’re not a million miles off from where we want to be, so we shouldn’t have any fear.”