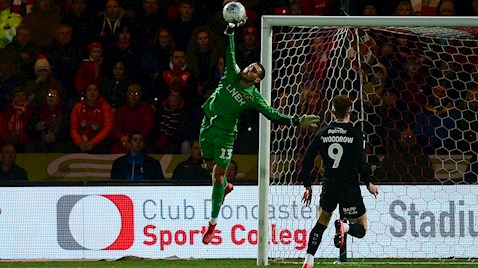 The second-placed Tykes made their short journey across South Yorkshire on Friday night, with the two teams playing out an entertaining derby game, with both goalkeepers making crucial saves to keep each other in it, and Marosi says Rovers can be happy with a point and a clean sheet.

"It was a close game between two very good sides, both teams had some good chances to score but their goalkeeper down the other end made some unbelievable saves to stop us from getting in front and really kept them in it," he said.

"We go into every game wanting to win, we were on the front foot and definitely had more than enough opportunities to make the breakthrough but, unfortunately, it's just not fallen for us.

"We're happy as a defensive unit to keep a clean sheet and get a point out of a difficult game, it's been a little while since we didn't concede a goal, so that's always nice and we can look to take that into the next game."

Friday's goalless draw saw Rovers maintain their unbeaten run at home which stretches back to the end of October, and Marosi says the side's form at the Keepmoat Stadium gives them the belief that they will remain in the top six come May.

"It's disappointing not to get that win that we've been wanting to get for a while, but we've not lost at home once again, we want to win as many as possible here, but we've still got a good point against a team that will be right up there," he added.

"There were periods in the second half where they probably had the upper hand, but we worked well as a team to cut them out, they had to dig in and close them down whilst keeping their shape and they made some fantastic blocks.

"We're all confident we can get into that top six at the end of the season, there is so much belief in this team and we're all looking to put in the hard work that will get us there, and we all believe we are good enough to stay where we are."