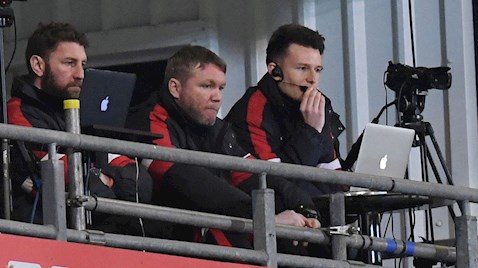 Barnsley have scored 64 Sky Bet League One goals this season and are one of the top performing teams in the league, but the second-placed side could not find a way past Rovers unyielding defence.

"We defended well, I can't really remember Marko Marosi making too many saves apart from that good stop in the first half," McCann said.

"I'm pleased for the back four in keeping that clean sheet because it hasn't been easy for them. We've missed some big players and we've had to change things because of injury but the boys have responded well to that bit of adversity, they're digging in.

"In the second half, both teams defended very well but neither team was really at their best from an attacking front."

Despite improving performances which have resulted in draws against Blackpool and Barnsley, McCann knows victories will be crucial if his side are to secure a play-off spot.

"In the first half, we were by far the better team, we played with energy and at a high tempo, and we should have been two up with the chances we had," he added.

"The second half was more even, they had a spell, then we had a spell. We probably moved the ball a little more slowly and it gave them the chance to build a bit of momentum but that's one of the best teams in the league and we've matched - or have been better than them - for the majority of the game.

"We need to get back to winning games, we don't care if that's against a Barnsley or a Luton as no one scares us in the league, and we've shown that by the performances we've put in against the other teams in the top six. We still have it in our hands to get in the top six with nine games to go, so it's all to play for."