Grant McCann felt the performance against Bristol Rovers was a controlled one from start to finish. 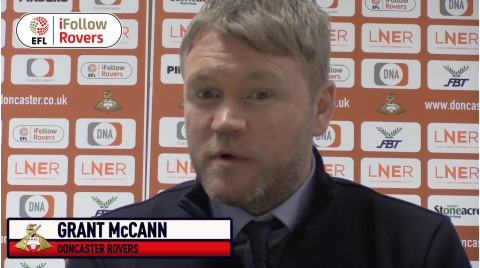 A double from James Coppinger along with goals from Mallik Wilks and Kieran Sadlier saw Rovers move back into the play-off places with a 4-1 victory at the Keepmoat Stadium.

He said: “It was a very controlled performance, our start to the game was excellent and we managed large periods of it.

“It was nice to go in at half-time 3-0 up, the players showed great belief and didn’t let anything affect them.

“To score early gave us confidence, and after that we were able to take the game away from Bristol Rovers.”

Sadlier’s second-half finish was the pick of the goals on the night, and the manager says it was good to get the Irish winger a second league start since joining the club in January.

He added: “We’ve got some very good attacking players at the club, it was good to be able to put Kieran in the team because he’s deserved it.

“It’s tough for players in his position because of the form of Marquis, Coppinger and Wilks, but he benefitted from a change in system and played really well.”

Season Memberships for 2019/20 are now on sale at the Club Doncaster Box Office in person, via telephone on 01302 762576 and online at tickets.clubdoncaster.co.uk.

Early bird pricing is available until Monday April 1 2019, when Silver Memberships will go off sale until the club’s final league position has been established in May.