Goals either side of the break from Burton Albion sentenced Paul Stancliffe’s side to back-to-back defeats for the first time this season. 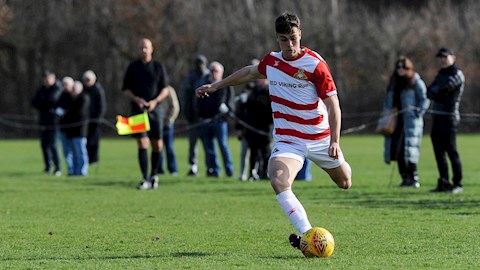 Burton asserted themselves in the game early on as they took the lead through Tom Armitage who charged through on Dec Ogley’s goal.

This came after Burton hit Rovers on the counter following Tom Weaver’s headed chance at the other end of the pitch.

Following the goal Rovers were able to unlock Burton’s defence and Rieves Boocock was fed through. He sliced his effort just wide.

Burton keeper Oliver Fairbrother was then presented with another problem from Rovers’ attackers as he was forced to punch away from a swinging Rovers corner.

In the second-half, AJ Greaves and Branden Horton worked a quick set-play between each other, before Horton’s shot spun just wide of the mark.

Kyle Clamp made a breakthrough on goal for the visitors which ended with him bending a shot into the bottom left corner – doubling the Brewers’ lead.

Reon Potts then cut a pass through Burton’s backline to release Myron Gibbons whose shot was saved from close range.

Rovers went through the gears to ramp the pressure on Sam Rose’s side, as Cameron Barnett chested the ball down in midfield before rushing towards goal, but a Burton foot stuck out to stop him in his tracks.

Substitute Nathan Dimou skewed an effort narrowly over the crossbar after a dangerous cross from a Rovers corner came in.

Stancliffe’s side did go close to sealing a consolation close to full-time as Will McGowan squared an effort across the net towards Junior Smith but an opposition defender got in the way to ensure that they kept a clean sheet.