Kieran Sadlier felt Rovers bounced back perfectly from their loss at Luton after an emphatic win at home to Bristol Rovers in Sky Bet League One on Tuesday night. 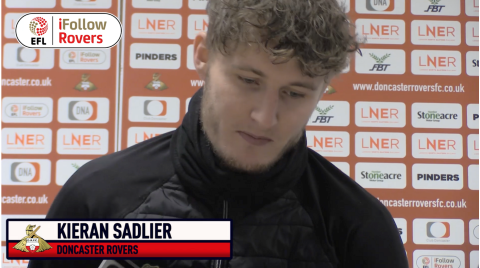 Rovers were in control from the off, taking a three-goal lead into the break before Sadlier scored the fourth, with Jonson Clarke-Harris reducing the arrears from the penalty spot.

"It was a nice goal of course but the most important thing was to get back to winning ways, we had a great start obviously and then we had to come out after the break and kill the game off and we did just that early on," said Sadlier.

"We played very well, and we started the game brilliantly, we had a game plan, we stuck to it, and it came off perfectly for us, I wasn't here when we beat them at their place, but a lot of the lads remembered it and probably used that to our advantage.

"They were a team in good form, a lot better form from the last time we played them, they've changed their manager and done well so we knew it'd be a tougher test, it was a different game, but we've done really well."

Sadlier put the seal on things just 35 second into the second half with a stunning 30-yard effort into the top corner, but despite his wonder strike against the Pirates, the man who signed in January from Cork City says Rovers need to kick on and show they deserve a play-off place come May.

"Every team has their dips and their bad spells and hopefully that's ours out the way now, it felt like we were back to controlling the game again here and we know ourselves how things have been recently, but we played some good stuff and it was a great way to bounce back," he added.

"We looked like we were back to our best here and we need to keep that going into the next few games, there will have been teams looking at our game here hoping that we'd stumble, but this result sends a message that we're still in control.

"We can play even better than we did here, we know we're capable of more, we have another big game coming up at home on Saturday, we all want the best out of each other, we have high standards and we'll be confident heading into the weekend."