Andy Butler has spoken of the immense pride he can take away from this season following a heart-breaking penalty shootout defeat in the Sky Bet League One play-offs against Charlton Athletic. 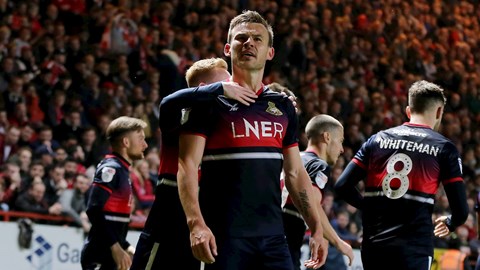 18 May 2019
Butler scored just two minutes from the end of normal time to force extra time, before another goal apiece for each side ensured that spot-kicks would decide who would play at Wembley but, despite defeat, the club captain says the experience will help the squad grow stronger.
“We have to move on and look forward to next season now, we’ll learn from these experiences - not many teams have come to The Valley and done what we’ve done, they finished third in the league but were taken all the way by Doncaster Rovers,” he said.
“There is a huge sense of pride in the changing room from what we have achieved this season, I’d have loved to have played at Wembley, we all would, but if there’s a way to go out, it’s doing it the way we did. As a club, as a squad, we were different class, and I think that will help us.”
Rovers won 3-2 on the night, with the game finishing 4-4 on aggregate, before a 4-3 penalty shoot-out defeat. Butler says the focus will shift quickly on to having a successful campaign next time around.
“If someone said to us at the start of the season that we’d be stood here being one game away from Wembley we’d have snapped their hand off, so it just shows how far we’ve come as a group this season and how we’ve matured,” he added.
“We will all learn from these experiences, there is not one person who can say from the outside looking in that we didn’t deserve to be where we are, and I think we’ve proved everyone wrong and done ourselves justice.
“There’s no point in us standing still and thinking that’s all we can be, we want to progress, we’ve seen what it takes to be up there, and we haven’t been far off this season, on our day we could’ve matched anyone, and we’ll be doing the same next year.”