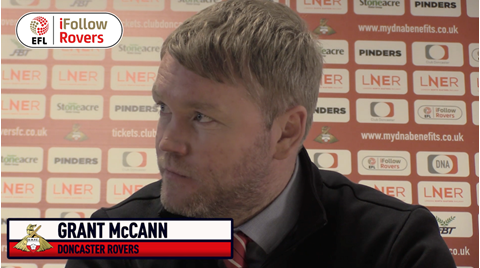 5 May 2019
Goals either side of the break from Kieran Sadlier and John Marquis ensured Rovers finished the season in sixth place to set up a two-legged semi-final against Charlton Athletic, and McCann was happy to see his side seal a top-six finish on their own terms.
“It was a very disciplined performance from us as we knew if we’d have approached this game in an open fashion we could have been beaten, Coventry’s form coming in to this had been great but I thought we were very good,” he said.
“It was a good header from Kieran at the back post and then John has shown great determination to score, the boys wanted to get the job done on their own terms rather than rely on results elsewhere and we’ve done just that.”
Rovers host the Addicks on Sunday May 12 (12.15pm kick-off) before a trip to the capital for the return leg on Friday May 17 (7.45pm kick-off) at The Valley with a place in the Wembley final at stake, and McCann says the belief is very high in the squad.
“We wanted to get that top six place - we owed that to our fans that came out in such big numbers and got behind us,” he added.
“I’d said it earlier on in the week that when they come here and support us it certainly makes a difference. The belief has grown in this side and I’m so proud for the players, staff and everyone at the club. This group is together and they all believe in each other, they drive each other every day and I’m sure that will continue going forward.”