Grant McCann said he was extremely proud of his team after they lost out to Charlton Athletic on penalties in the Sky Bet League One play-offs semi final. 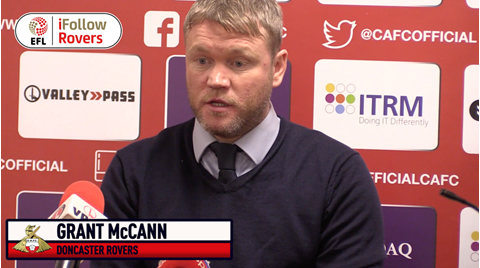 The Addicks took an early lead through Krystian Bielik but Rovers battled back with Tommy Rowe scoring just eight minutes later before Andy Butler drew the tie level on aggregate with his 87th minute goal. In extra time John Marquis put Rovers ahead but Charlton hit back immediately through Darren Pratley taking the tie to penalties.

“I think – apart from the first half in the home game – we were much the better team. We’ve just come to a team who haven’t been beaten at home in 2019 and we’ve played them off the park. We’ve taken them all the way.

Rovers have been written off as underdogs all season with very few neutrals or critics giving them any hope of progressing against a very good Chartlon Athletic team.

“Before the second leg, even before the first leg we were given no chance. Everyone was so confident that Chartlon were going to win and they have but we were outstanding, to a man first class,” said McCann.

“I’ve got a squad who believe in themselves, believe in each other, and they believed they could do it in this game, I could sense it. We’ve given everything. We’ve pushed a very good Charlton team all the way and they’ll know they’ve been in the game tonight.

Season Memberships for 2019/20 are available now. Secure your place at the Keepmoat Stadium now by calling 01302 762576 or going to tickets.clubdoncaster.co.uk.