Rovers boss Grant McCann says his side will relish the tag of underdogs as they head into the Sky Bet League One play-offs. 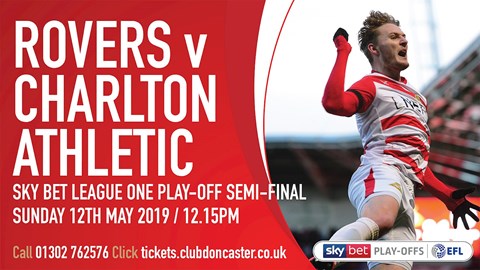 5 May 2019
McCann’s men finished sixth in the table and will now take on Charlton Athletic in a two-legged semi-final, with one of those sides going on to face Sunderland or Portsmouth in a winner-takes-all Wembley showdown.
He said: “We’ve been underdogs throughout the season, this group were written off from day one but they’ve proved everyone wrong.
“They proved them wrong here by getting in the play-offs, now we want to prove them wrong by getting promotion.
“We have a tough couple of games coming up now against Charlton, we had a tough game back at their place in the league, but they’ll know that they were lucky to come away with a point at the Keepmoat Stadium, they’re a good footballing side but we have to make sure we deliver again.”

Tickets for Sunday's game at the Keepmoat Stadium can be bought online at tickets.clubdoncaster.co.uk, in person via the Club Doncaster Box Office in person or via phone on 01302 762576. Bronze Memberships, which would allow purchase of tickets at the second stage of sale, are still available for just £10.