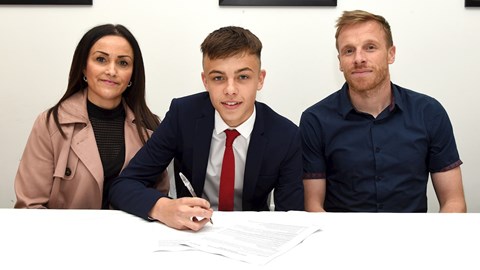 This rounds off an impressive season for the Academy. The U18 team came second in the Youth Alliance North East Division pushing eventual winners Grimsby Town right to the last day and were also ranked top for education in the country.

Tony said: "I’m delighted that nine of our academy players have signed on to become first year scholars. It’s a testament to the quality that is coming through the Doncaster Academy at the moment. Each of the nine boys has worked exceptionally hard both on and off the field to be given this opportunity and I’m sure they will make the most of it.

"All of these young men have made appearances in the U18s team in the 2018/19 season and all of them have shown a lot of potential and are developing nicely. We are excited to see where that potential can take them.

"Rovers is a club that offers a genuine pathway from U8s through to the first-team and that has been proved with Reives Boocock, Branden Horton, and Lirak Hasani all making first team appearances while Myron Gibbons and AJ Greaves have both appeared on the bench.

"They are leading the way and showing the rest of the academy how it can be done. This is, in large, a testament to the first-team management staff and Grant McCann and Cliff Byrne as they continue to show faith in the youngsters and giving academy players an opportunity."