£49,000 was raised for charity as former players of Rovers and Leeds United rolled back the years at the Keepmoat Stadium. 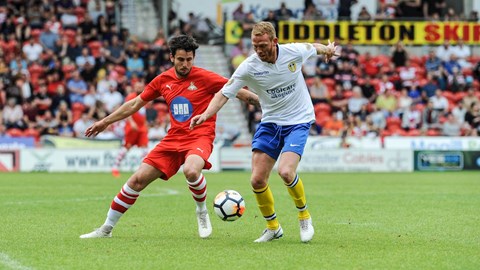 29 May 2019
The annual Eve Merton Dreams Trust match saw legends from both sides take on each other, with supporters raising sponsorship to play alongside their heroes.
With a large crowd packing out the West Stand, as well as other fundraising activities outside the stadium and in the concourses, there was a real family atmosphere at the end.
And those who came down to watch Rovers were not disappointed, as a Paul Heffernan hat-trick helped inspired his side to a 7-2 success over the Leeds outfit.
The full goalscorers were:
29 - Paul Heffernan 1-0
39 - Paul Heffernan 2-0
47 - Noel Whelan 2-1
58 - James Hayter 3-1
61 - Paul Green 4-1
78 - Paul Heffernan 5-1
83 - James Hayter 6-1
86 - Gary McSheffrey 6-2
90 - Connor Steel (fundraiser) 7-2
As well as the players who took part, there were some fantastic unsung heroes who fundraised tirelessly for the event. They were: Andrew Harriman, Alan Knowles, Connor Steel, Lee Parker, Lee Pearson, Bobby Ziyaei, Sid Jones, Lee Parkin, Daniel Pearson, Rob Johnson, Ryan Hunn, Stevie Spence, Andrew Hurst, Dave Parry, Michael Smith, Matt Mears, Alex Sanderson, Michael Grant, John MacLeod and Scott Lamb.
Season Memberships for 2019/20 are available now. Secure your place at the Keepmoat Stadium for the Early Bird prices until May 31 by calling 01302 762576 or going to tickets.clubdoncaster.co.uk.