Ben Whiteman took home the Player of the Season award at the club’s annual end of season award ceremony on Sunday May 5. 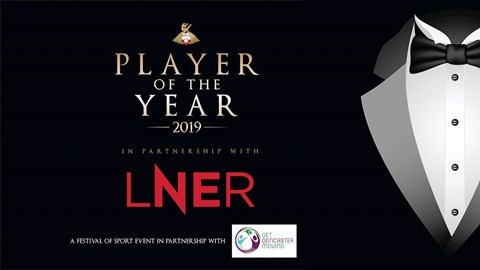 As well as the night’s top prize the 22-year old also picked up the award for Players’ Player of the Year making for an impressive season for the midfielder who has been a key figure in Rovers success.

Speaking after he won the main award, Whiteman said: “It's obviously a great achievement to win but, to be honest, the Players' Player of the Year trophy means more because the lads have voted for it.

"Everyone in the team has been outstanding all season from the defence right through to the strikers - everyone deserves credit. Because of all that hard word, we've reached the play-offs. It's a lottery now so hopefully we can do the job and get to Wembley."

It was also a successful evening for Rieves Boocock who was crowned Young Player of the Year. The 18-year-old scored more than 30 goals across all competitions in the 2019/2020 campaign helping the U18s come second in the Youth Alliance League. Boocock capped off a good season by making his Sky Bet League One debut away at Gillingham and came on as a late substitute against Premier League Crystal Palace in the Emirates FA Cup.

Mallik Wilks won the Social Media Player of the Year award – this award was given to the player who had the most combined wins of the post-match twitter polls. Wilks stormed away with the win ahead of Whiteman and Herbie Kane. The Leeds United loanee has had a fantastic season, tearing the league apart with his power and pace. Wilks showed his skill to score an impressive 16 goals and captain Andy Butler said of the forward: “I wouldn’t want to play against him."

Goal of the Season was voted for in the room with six of the best strikes from across the season shortlisted. Ali Crawford's free-kick against Rochdale was voted the winning goal picking up 45% of the vote.

John Marquis collected his well-deserved Golden Boot Award. Saturday’s goal against Coventry City was his 25th of the season finishing off another exceptional campaign for the striker. It was also his 61st league goal in a Rovers shirt putting him sixth in the overall leading league goal scorers for the club.

There was also a Special Achievement Award which was given to the team behind the scenes who worked so hard over the course of the year to win the overall EFL Family Club of the Year Award.

Rovers will face Charlton Athletic at home in the first leg of the Sky Bet League One semi-final on May 12. It's your last chance to back the boys at home this season. Click here for ticket information.