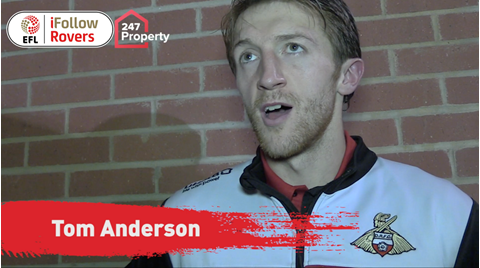 10 November 2019
Rovers head to come from behind against fellow Sky Bet League One side Wimbledon at a very rainy Kingsmeadow, but Anderson believes the team dug in well to ensure they’re at least in the hat for round two.
“I think we did well, we made sure that we stuck at it, it’s a difficult place to come, the weather didn’t make it any easier either, we started the game well, and then obviously they got the goal, but we stuck at it and got the goal in the second half,” he said.
“Before they went ahead I felt we were on top, we kept on going, and still we’re in the hat for the next round, we just have to make sure we go and do the job now in 10 days’ time back at home.
“We know we have plenty of spirit in this team, we’ll always fight until the very end and I think that really showed here, we fought well and dug in to earn the replay and we’re still in the cup.”