Rakish Bingham said it was good to be back involved in the game as he made his Rovers debut in Saturday’s 2-2 draw with Burton Albion. 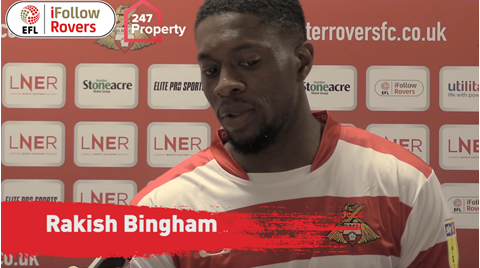 The forward joined the club on Friday and was thrust straight into Sky Bet League One action as Rovers pressed for a winner inside the final 10 minutes, but despite not being able to help claim the win, Bingham was pleased to be back in action.

“It was good for me to get out there for a little bit, I just wanted to help them team as much as I possibly could to try and nick the win, I just want to build on this now and hopefully be a bit more involved,” he said.

“We went down twice and showed resilience to come back both times and get a point from the game, on the balance of things I think it was a good point, we weren’t at our best and let them in to it, but we still managed to grind out a result.

“When you come on you just want to ease yourself into the game, try and get up to the tempo and really make an impact on the match, I tried to help out as much as possible but unfortunately it just wasn’t to be.”

Bingham’s deal at the Keepmoat Stadium runs until January, and he is keen to make an impact in the side in order to force Darren Moore to give him a longer contract in the New Year so he can be a part of a big season for Rovers.

“I’ve been in with the group for over a week in training, the gaffer said he wanted me to sign and I didn’t have to think twice about it, it’s a great bunch of lads, a great club, and they’re really on the up,” he added.

“I feel now is the right time for me to test myself, League One is another challenge and I want to stake my claim in this league, this is a brilliant team that I want to be involved with and I think this is the right opportunity for me.

“I only have a short deal at the moment but it’s a good chance for me to show what I’m really capable of, and ultimately my aim is to try and earn a longer contract in the near future, hopefully I can play my part in what I think can be a big season.”