Darren Moore felt his side did well to earn a 2-2 draw against Burton Albion in Sky Bet League One. 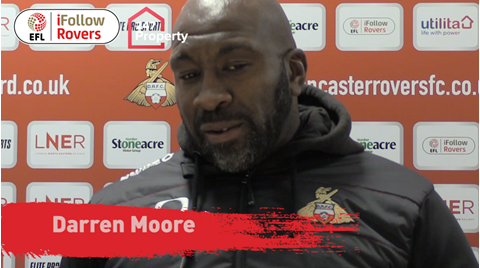 Rovers twice came from behind to secure a point at the Keepmoat Stadium, and the manager says he was pleased to take something from the game.

He said: “It’s a point won and we didn’t play as well as we could have done, but credit to Burton they came here and stuck to their game plan.

“Sometimes you look back at games and there are ones where things don’t go your way but you managed to take something from it.

“There are contributing factors that may have prevented us from performing as we would have liked to on the day.”

Both Rovers’ goals came quickly after falling behind, and Moore says that shows the belief within the group.

He added: “We felt that we gave away the ball for both goals and got punished but the response of the team was excellent.

“We showed good fight to score quickly and I thought towards the end we were the team that looked more likely to get a winner.

“It wasn’t to be in the end and it probably would have been harsh on them, we take a point and move on.”