Rovers secured a place in the second round of the Emirates FA Cup after goals from James Coppinger and Rakish Bingham gave them a 2-0 victory against AFC Wimbledon at the Keepmoat Stadium. 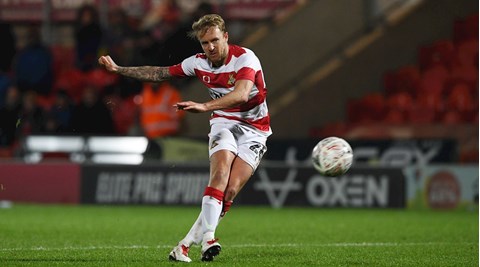 In freezing temperatures, both sides took their time to get warmed up, but it was the visitors who had the early opportunity with Kwesi Appiah hitting a post from close range.

Two second half goals set Rovers on their way and they could have had more with Ben Sheaf and Jon Taylor both seeing efforts cleared off the line.

Rovers opened the scoring on a quick move which started with goalkeeper Sney Dieng. JonTaylor’s ball through found Coppinger unmarked and being played onside by Terell Thomas. The Rovers no.26 was the calmest man on the pitch as he ran away from the Dons defenders, turned inside and chipped the ball over Nathan Trott.

Rovers extended their lead with around 20 minutes to go, with substitute Rakish Bingham using his first touch of the ball to tap in from close range from Coppinger’s inch-perfect cross.

The home side could have made it three when fantastic link-up play between Taylor and Coppinger found Brad Halliday’s overlapping run.

The right-back got to the byline and cut a dangerous looking ball back across goal but it evaded everyone from both teams.
Taylor probably thought he had made it three when Sheaf laid the ball off to him. The Rovers no.10 struck it sweetly but watched it cleared agonisingly off the line by the head of Delaney.

Sheaf also had one cleared off the line. His powerful header into the ground bounced kindly for Appiah who was defending his post. Bingham was quickest to react to the loose ball but could only scoop it over the bar.