Harrison Myring has put pen to paper on a deal until January 2020 after a successful trial period at the club. 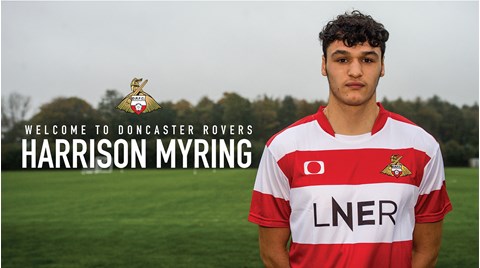 The 18-year-old striker began his career in Leicester City’s Academy and has said he feels ready to make the step up to U23s at Rovers with an ultimate aim of pushing the first-team strikers for a place.

“It feels good to sign for the club. It’s good to get settled in, get started and get back to playing football,” he said.

“I’ve been here a few weeks and had a few games while I’ve been on trial so it will be to kick on and start playing full time again.”

Myring had been on trial at a number of clubs in the summer but felt that Rovers was the right fit for him.

“I like the playing style here, I think it suits me,” he added.

“The gaffer said he likes fast strikers and that’s what I think I bring. I’m quite quick and like to run in behind and the players here always find you.

“The gaffer has told me he wants me to use my strengths, be powerful and quick and keep looking forward – and that’s what I’ll try and bring. I’ll look to offer as much going forward as possible.

“Obviously as a striker you want goals and assists so I will try and bring that too. I want to start scoring goals in the U23s and then hopefully make the step up to the first team.”

Harrison is eligible to play in Saturday’s match against Burton Albion. Purchase your tickets at tickets.clubdoncaster.co.uk