Rakish Bingham has signed a short term deal with Rovers until January 2020. 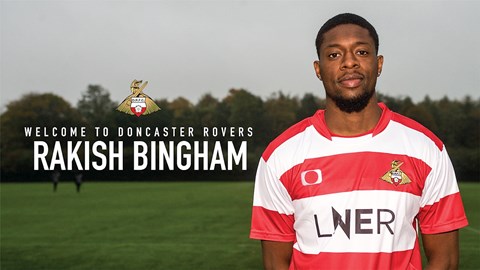 The 26-year-old striker has plenty of EFL experience having spent time at Wigan Athletic, Mansfield Town, Hartlepool Town and most recently Cheltenham Town.

“I’m over the moon to sign for Rovers. I’ve been training here just over a week so I’m delighted to get the deal over the line,” he said.

“I’ve played in the English game for quite a while now so I know what to expect. The gaffer’s told me he wants me to give my all, keep the standards that the lads set, and express myself.

“I want to showcase what I can do. It’s a great squad, I just want to try to add to it.”

Bingham has been training with the first team and says that he has found settling in easy.

“It helps that I know a few of the lads already but since I’ve come through the door, everyone has been really welcoming and that helps on the pitch.

“I know Donervon Daniels - I grew up with him and I know Brad Halliday from Hartlepool and Matty Blair from Mansfield.”