Darren Moore wants to quickly draw a line under Saturday’s defeat at Oxford United, as he quickly turns attentions to Saturday’s visit of Bristol Rovers. 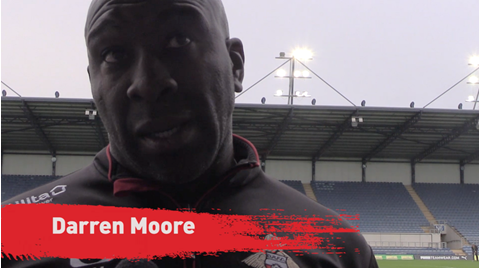 It was Rovers' first league defeat on the road under Moore, and the Rovers boss admitted he and the team have to learn from the result.

“Credit to Oxford because they are a good team, but there were areas where we needed to be better. It was a tough day for us, but we’ve got to learn from this,” he said.

“I’m disappointed with the result, we needed to show more aggression to capitalise on the game, but we missed those opportunities. It was a bad day, but at times we had chances to get back into it.

“We’ll analyse the game over the weekend and get back to the drawing board on Monday morning. I don’t want to lose a day on it because we’ll start building in terms of our preparation straight away for the next game.”

Kwame Thomas made his league debut for Rovers, playing just over an hour before being replaced by Niall Ennis on his return from injury.

“What we’ve got in Kwame is a No.9 who will get hold of the ball. He’ll be mobile, get on the end of crosses so he brings something different. We’re pleased to have him in and from here he will get stronger,” added Moore.

“You can see that we can get the ball up to him and it won’t keep coming back in terms of his presence. He’s a different player for us, and if teams sit deep, we’ve got a player who can get on the end of crosses.

“We only wanted to give Niall a bit of time on the pitch, but it’s good to have him back. It’s another extra body and he will have a full week in training and get ready for the weekend.”