Captain Ben Whiteman felt the outcome of his late penalty was never in doubt as he stepped up to give Rovers three points in in the South Yorkshire derby win over Rotherham United. 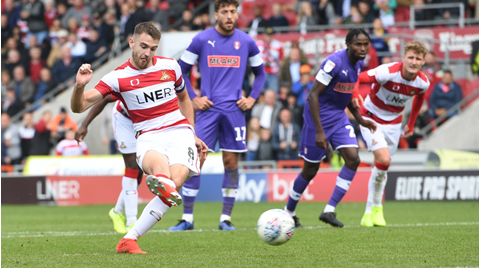 iFollow Rovers freeview | Ben had belief ahead of Rotherham penalty

The 23-year-old, who took the captain’s armband this season, kept his cool to send Lewis Price the wrong way from 12 yards.

He said: “I’ll always back myself, that’s why I step up and take them, I’m enjoying it a lot and it’s a privilege to wear the armband. I’m enjoying leading the side and I’m learning all the time, I try and lead from the front and hopefully the lads follow.
“All I was thinking about was just sticking the ball away, I’ve been in similar situations from the spot before and I was confident that I was always going to score.
“It’s an amazing feeling scoring a goal, but to do it in a derby such as this one definitely makes it all the more special.”
Whiteman’s 88th-minute spot-kick completed the turn-around for Rovers who trailed at the break, and the skipper was quick to heap praise on the substitutes that changed the game after the interval.
He added: “IThe subs that came on did very well and had an impact, much like they did on Tuesday night, I think Rotherham became more tired as the game went on and that allowed us to move the ball well.
“We were a lot more composed after the break, we managed to get the ball down and into good areas and managed to limit their chances, and in the end fully deserved the three points.”