Defender Donervon Daniels felt Rovers were good value for their point away at unbeaten Coventry City on Saturday. 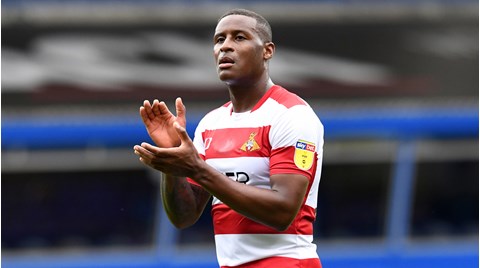 29 September 2019
Rovers led through skipper Ben Whiteman’s first-half strike before being pegged back late on at St. Andrew’s but Daniels feels that, despite the disappointment of conceding late, his side can take heart from another strong performance on the road.
“It was a well earned point, obviously there’s a bit of disappointment not to hold on to all three points but I felt we all defended really well and everyone in the team did their bit to get the point,” he said.
“We had a few chances to seal the game at the start of the second half where on another day that could take the game away from them, but every man worked hard and put their body on the line here. We’ll take the point  away from home against a difficult side, we can move on now and we can have a really positive outlook when we reflect on it.”
Daniels joined Rovers from Sky Bet Championship side Luton Town at the beginning of September and started competitively for the first time in the 1-1 draw against the Sky Blues, and he is hoping to see his hard-work pay off over the next few months with a decent run in the side.
“I’ve been working hard since I came here to try and force my way in, I’d played a couple behind closed doors games to get myself up to speed -  I’ve put in a lot of work to get myself back out on the pitch and the gaffer said he trusted me to go out and perform,” he added.
“I enjoyed the game and personally I’m pleased with how I did for my first start of the season, now I want to try and consolidate that. It was a really good defensive performance from everyone, though.
“I didn’t really have a pre-season so when the opportunity to come here and work hard with a good bunch of lads came up I was happy to take the chance, I want to help us climb up the table as much as I can and am looking forward to putting in some hard work over the next few months.”