Darren Moore was content with a point as his side became the first team to take any points away from Coventry City at St Andrew’s. 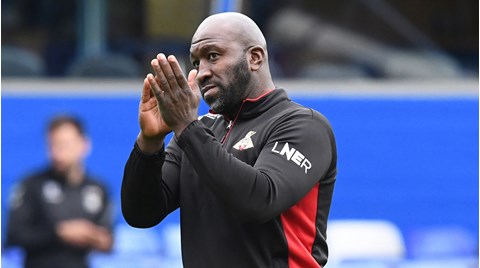 Rovers took the lead in the first half with Ben Whiteman finishing calmly after the away team broke in numbers, but the Sky Blues snatched a point when substitute Amadou Bakayoko scored at the death.

“I thought it was a good game played between two good teams - I would say they are the best team we’ve played this season,” said Moore.

“They’ve got some wonderful attacking players but we knew that if we could be right off the ball then we’d get one or two chances within the game and that’s how the game went.

“I thought we defended resolutely as a team. I haven’t got any complaints with the performance – I thought it was another solid performance and at the end of it, we’ve come away with a positive point.

“On the road you’ve seen three strong performances and we’ve come up with the right answers, but when we’re performing like this on the road the three points aren’t far away.”

Moore gave Donervon Daniels his first start after Cameron John picked up an injury during the week and he praised the centre-back.

“Donervon’s come in and I thought he was excellent - he showed his experience and calmness. At times he showed his speed to cover the ground and his decision making in possession was good,” he added.

“I don’t want to single out anybody but I’m sure Donervon and Tom Anderson will get the plaudits. I thought they were two rocks at the back but the whole team has got to take credit for that defensive performance.”