Madger Gomes says Rovers will learn a lot following a 3-2 defeat at Blackburn Rovers in the Carabao Cup first round.

The Spanish midfielder believes the first competitive game of the new season will stand them in good stead.

He said: “We’re disappointed to lose the game but it was a good experience to come up against a solid Championship side. 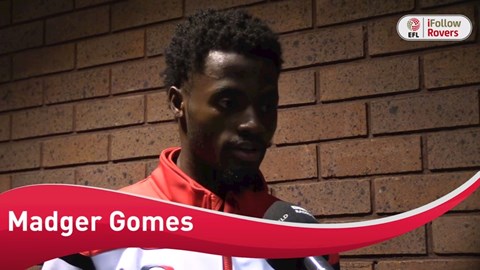 WATCH | Gomes says there are positives to take from Blackburn defeat

“We need to continue with our hard work and hopefully when the first league game comes around we can get the victory.

“We’ve got a lot of work to do but everyone is in the same boat, we’re pleased to be back but know there is plenty to catch up on.”

Gomes scored his first Rovers goal with a rasping drive at Ewood Park, and says he has been working on improving his goal record.

He added: “I’m happy to score, I don’t normally score many goals and it was a nice moment but it is a shame we couldn’t win the game.

“I’ve been working hard in training on my shooting, and I managed to get in an area during the game to have a go.”