Darren Moore felt the Carabao Cup tie at Blackburn Rovers was a good workout for his side in what was their first competitive game of the 2020/21 campaign.

Moore’s side were beaten 3-2 in an entertaining game at Ewood Park, but the manager was pleased with various aspects of the performance.

He said: “I thought it was a good game, we started quite well and had to deal with them because they are a good team. 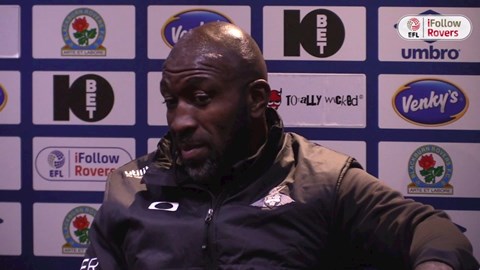 Moore spoke to the press following defeat at Blackburn Rovers

“In the end we ran out of legs in terms of where we are, we knew it would be tough in the last 20 minutes.

“I’ve got no complaints with it and we probably lost the game because we haven’t had as much time on the training pitch as we would have liked.”

Rovers initially turned the game on it’s head after taking a 2-1 lead midway through the second-half, and Moore says he wanted his players to express themselves.

He added: “When the boys are firing then that sharpness is there but we will take a lot out of the game in terms of matching a really good side.

“We told them at half time to recognise the state of the play, we allowed them to play with a bit more freedom and we took the opportunities.”