Ed Williams says he was buzzing to secure a two year deal at Rovers following a successful trial period at the club.

The creative midfielder has been trialling with the club for several weeks and impressed in behind closed doors matches against Scunthorpe United, Bradford City and Derby County. 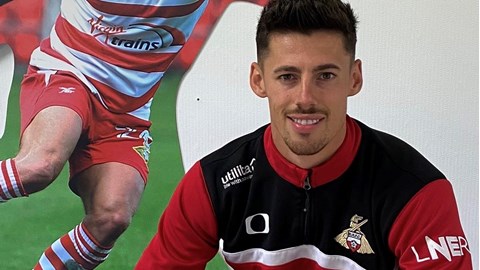 “I’ve obviously been here for two weeks now and I think it’s gone really well and I’m buzzing to be here.

“All the boys and the staff have been really welcoming and it’s been really enjoyable. I’ve enjoyed it a lot.”

Williams started his career at Cheltenham Town but most recently played at Kidderminster Harriers the 25 year old says he’s determined to prove himself in the EFL again.

“I was driven from the start to do well and I’ve got to impress,” he added.

“It’s a lot of pressure to do well and earn a contract but I’m confident in my own ability and I’m pleased it’s paid off.

“I’m determined to prove myself. It’s been a long few years in non-league but I’ve learned a lot from it and I feel like I’m ready to make the step.”

Watch Williams' first interview since joining the club on YouTube