Tyreece John-Jules’ goal wasn’t enough as Rovers fell to a 2-1 defeat against Hull City at the KCOM Stadium.

Hull took the lead through Josh Maggenis on the 25th minute and until half-time, Rovers were under pressure finding themselves with plenty of defending to do. They did well to keep the deficit to just one goal at the break and started the second period more brightly.

The introduction of Tyreece John-Jules added a different threat going forward and the Arsenal loanee was on the scoresheet just 15 minutes after he came on. Rovers had looked the better team at that point but when Richard Smallwood’s long-range effort was spilled, Tom Eaves was able to tap in to an empty minute in the 86th minute to wrap up three points for Hull City.

Darren Moore made just one change from his side that claimed Emirates FA Cup victory over Carlisle United just three days earlier with Cameron John coming into the team in place of the injured Danny Amos.

Ed Williams got a place on the bench while Madger Gomes – who made a sub appearance on Sunday – was left out of the squad.

It was a slow opening to the game as both teams tried to feel their way into the match. Fejiri Okenabirhie went closest for Rovers. A smart chest from the no.9 bought himself a bit of space to shoot and he connected well with the volley earning a corner inside five minutes.

At the other end, former Rovers loanee Mallik Wilks should have done better when he volleyed wide at the back post, while Magennis also proved a handful – first heading over from a corner and then volleying wide.

And it was the Northern Irish international who gave the home side the lead on the 25th minute. Wilks earned a free kick just outside the Rovers box as he went to the ground under the challenge of Joe Wright. The home side executed the chance with aplomb.

George Honeyman touched the ball to Magennis who struck it sweetly leaving Joe Lumley with no chance.

The goal changed the complexion of the game with Rovers struggling to get out of their own half under the increasing pressure of the confident tigers.

Hull could – and probably should - have doubled their lead ten minutes later as the table-toppers continued to turn the screw. Magennis was first to go close. His curling effort rattling the crossbar while Greg Docherty’s follow-up strike was blocked off the line by Wright. Wilks then fired one from the edge of the box which was tipped around the post by Lumley. The QPR-loanee did well to make the save as the ball came through a lot of bodies.

Rovers continued to face wave after wave of attacks from the home side, but mostly managed to limit to them to pot-shots from distance which whistled dangerously all around the goal without actually testing the keeper.

Darren Moore’s men started the second half a little more brightly with Josh Sims winning his side an early corner after some really positive running by the Southampton loanee. His delivery was turned on target by Halliday, but he was trying to play it through a sea of bodies and it was blocked easily.

There were hearts in mouths when Wilks and Lumley raced to a loose ball in the Rovers box. Wilks ended up on the ground asking for a penalty, but referee Anthony Backhouse was unmoved by the appeals and booked the winger for diving.

Reece James was then bundled over in the Hull penalty area but the left-winger (for this match at least) had already committed a foul and a free kick was awarded.

Lumley made the first save of the second half with around 25 minutes of the game remaining he was there to punch clear when Honeyman’s delivery from a corner-kick almost snuck straight in and Tom Anderson was on hand consistently to block through-balls and head clear crosses.

Darren Moore’s men put their best bit of passing play together with 15 minutes remaining. Excellent one-touch work through the middle of the park eventually saw Rovers work the ball out to Sims who fired a dangerous looking ball into the six-yard box with Rovers players piling forward to tap it in. There was an important intervention by the Hull defence.

Hull hit back with a big chance to seal the game which fell to goal-scorer Magennis. With Rovers pressing  forward, there was space for Hull to break in numbers, but Lumley stuck out a leg and made a good stop.

Rovers managed to capitalise on their better spell in the 80th minute as they worked the ball out to Sims again. This time the winger was able to pick out substitute John-Jules who had managed to find himself half a yard of space in the six-yard box and fired home at the first time of asking.

Rovers had looked to be in the ascendancy as the game eeked into the final minutes, but it was to a Hull substitute (rather than a Rovers one) who would decide where the points went in this game. Richard Smallwood’s strike was spilled by Lumley and Eaves pounced on the loose ball, tapping into the empty net.


Rovers bowed out of the Emirates FA Cup with defeat to West Ham at the London Stadium. 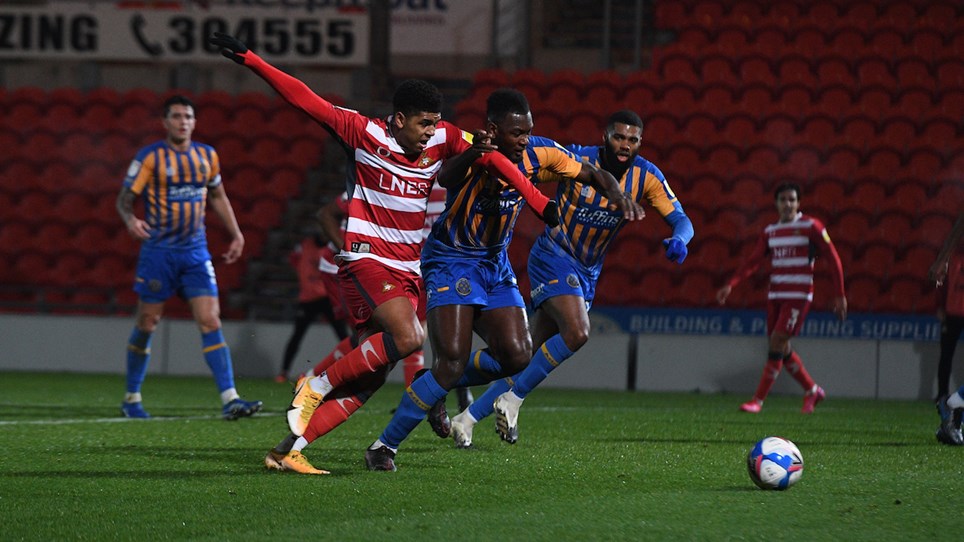