James Coppinger, Tom Anderson, Joe Wright, Brad Halliday, Danny Amos, Andy Butler and kit manager Mat Hawkhead have been raising money for the testicular cancer charity by growing moustaches throughout November and even got to show them off on prime time national television in Rovers Emirates FA Cup first round match vs FC United of Manchester.

You can find out more about the Oddballs Foundation by visiting their website: www.theoddballsfoundation.com

James Coppinger said: “We wanted to try to raise funds for Oddballs Foundation. We did some stuff for them as a team during lockdown. They’re a fantastic charity raising awareness of testicular cancer. 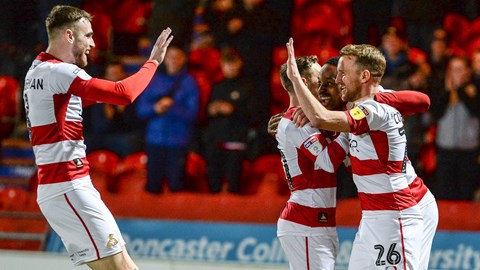 “We thought we’d grow the tache and put some smiles on some faces as well as raising a bit of money for a fantastic cause.

“We want to say a massive thank you to everyone who donated to our Just Giving Page and those who helped us spread the word and sparked a few conversations about testicular cancer.”

The players would like to thank everyone who supported their fundraising efforts raising more than £600 - the squad have topped up the amount donated to £1,000 which will be donated to the Oddballs Foundation.