Matty Blair was pleased to make his first league start since September and is looking to kick on in the final 13 games of the campaign. 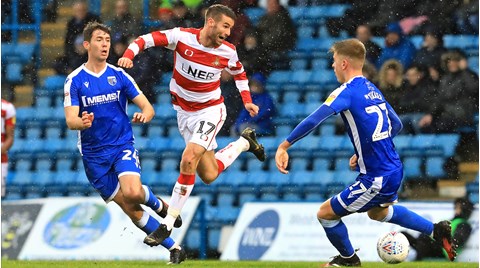 16 February 2020
Blair's last start came at Ipswich Town in September before a groin injury, which required surgery, put his season on hiatus.
He said: “I’ve had to overcome that frustration so it felt good to get out there for a long period. Hopefully I can keep getting more minutes in my legs now and prove why I should be in the team but that isn’t a quick process.
“I want to try and get back up to full speed as much as possible, there were some bits where I was still rusty but that’s normal.”
Blair felt Rovers were unfortunate to come away from Priestfield Stadium with nothing after being beaten 2-1 by Gillingham in Sa frustrating match that saw them play two-thirds of the game with 10 men.
Ben Sheaf had given Rovers a first-half lead before the Gills turned the game on its head to take all three points.
He added: “It was always going to be tough for us, they play a certain way and the conditions made it even more difficult.
“It’s one of those where we feel we’ve done quite well with the efforts we’ve put in, but the result doesn’t show that.
“The first third of the game went to plan and when we were getting stronger as the game went on before the red card.”