Niall Ennis' strike was not enough to rescue a point for Rovers on a frustrating afternoon at Fleetwood Town. 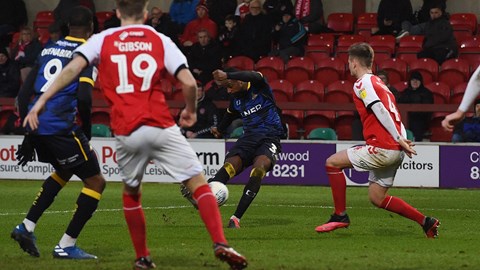 1 February 2020
Ched Evans and Harry Souttar put the home side two goals ahead in a match where both sides had to battle tough conditions with heavy winds disrupting the flow of the game.
Ennis fired home to get Rovers back in the game, but despite late pressure the visitors were unable to find a leveller.
Madger Gomes and Joe Wright returned to the starting XI as manager Darren Moore made two changes, with Rovers sporting black armbands in tribute to Jordan Sinnott who was killed in Retford the previous week. Sinnott was a footballer who played alongside Wright in Huddersfield Town's Academy in their younger days.