Battling Rovers fell to a frustrating defeat at Gillingham in a match which hinged on the sending off of Fejiri Okenabirhie. 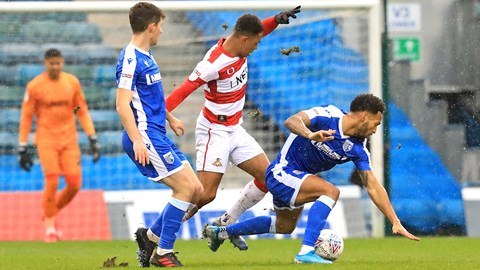 15 February 2020
Ben Sheaf had fired Rovers ahead with a stunning opening strike, curling the ball past Jack Bonham from distance for his first goal for the club.
But the game turned when Okenabirhie was shown a straight red after referee Josh Smith felt he had challenged Barry Fuller unfairly.
The Gills levelled just before the break when a corner somehow found its way in at the near post, and they sealed the three points when Cameron John’s attempted clearance only ended up with the ball in the back of Seny Dieng’s net.