Rovers chief executive Gavin Baldwin says everyone at the club is saddened by the death of the club's former goalkeeper Harry Gregg. 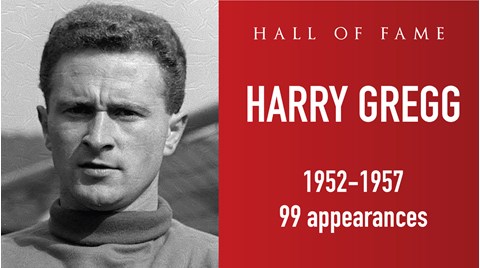 17 February 2020
Gregg made 99 competitive appearances for Rovers in the 1950s before being recruited to join the famous Busby Babes at Manchester United in 1957.
A year later he was part of the squad involved in the Munich Air Disaster, bravely rescuing people from the plane wreckage.
Gavin said: "The thoughts of everyone at Rovers are with the friends and family of Harry Gregg, who made 99 appearances for Rovers before being signed for Manchester United by Matt Busby in 1957 and becoming a hero of Munich.
"He was one of the first players inducted into Rovers’ hall of fame in recognition of the contribution he made to the club, earning himself a richly deserved move to the Busby Babes of Manchester United.
"Harry's strength of character was never more evident than the year after his move to Old Trafford when his bravery helped save the lives of team-mates on that tragic night in Munich. From everyone at Rovers, may he rest in peace."
Harry  arrived in Doncaster from Northern Ireland in 1952, signed by his fellow countryman Peter Doherty following recommendations from his network of scouts.
He did not have long to wait for his debut, replacing Ken Hardwick for the thrilling 3-3 draw with Blackburn Rovers in January 1953. Harry had the misfortune to dislocate an elbow and did not return until given the last seven games of the season. The next two seasons were frustrating, and he could not force his way past Hardwick.
His luck finally changed in January 1956 when he replaced Hardwick and he did enough to remain in possession of the jersey for the rest of the season. Not only that, but in 1956-57 he missed only two games, and on both occasions, he came straight back into the side. Hardwick was now very much the deputy, and he moved on at the end of the season. Gregg was also Northern Ireland’s No.1, winning nine caps while with Rovers, and playing a huge part in their qualifying campaign for the 1958 World Cup. He was a fearless goalkeeper, at a time when the man between the sticks enjoyed little protection, although he always gave opposing forwards as good as he got. He never wore gloves and often played on with injuries, including a broken finger.
Harry’s form had not just been noticed in Ireland. Matt Busby was on the lookout for a new goalkeeper and in December 1957 he paid a fee of £23,500 to take Gregg to Old Trafford. This represented a record for Rovers for a player sold Gregg had not been with Manchester United for long when the club suffered the tragedy of the Munich air crash in February 1958. Gregg, shaken but unhurt, showed great courage in helping his team-mates and other passengers out of the wreckage and risked his life to save a female passenger. He was soon back in goal for United and went on to establish himself as one of their finest players Harry also earned 25 full international caps for Northern Ireland and played a heroic role for them in their World Cup campaign in Sweden in 1958 when they reached the quarter-finals.
After his playing career ended, Harry managed Shrewsbury Town, Swansea City, Crewe Alexandra and Carlisle United. In 1971 he was offered the job as Rovers manager, but he declined the offer. Maybe he recognised the dangers of going back to somewhere where he had previously enjoyed success.