Darren Moore was left disappointed as his team came away from Highbury Stadium empty handed on Saturday. 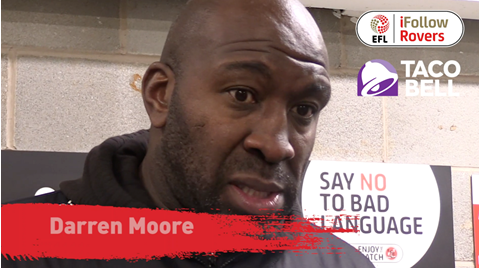 Goals from set pieces for Ched Evans and Harry Souttar put Fleetwood Town ahead and, while Rovers did pull one back through an instinctive finish from Niall Ennis early in the second half, Moore’s side were unable to complete the comeback.

“I’m disappointed and the boys are too because we’ve lost the game from two set-plays,” he said.

Once they had the lead, the hosts began to slow the game up which resulted in a yellow card for their goalkeeper Alex Cairnsand five additional minutes at the end of the game - Moore believes the tactics show the respect Fleetwood had for his team.

“I thought they paid us a lot of respect in terms of how they went about the game,” he added.

“It was a stop-start game. I thought they looked to spoil the it with little free-kicks and fouls, they were taking as much time as they could out of the game.

“The way they controlled and managed the game in terms of free-kicks and pettiness is a credit to them. We wanted it to flow more and when we did get the ball I thought we played through them, around them and 75% of the balls were good up until their final third.”