Darren Moore felt his players gave everything to the cause in Saturday’s 2-1 defeat at Gillingham in Sky Bet League One. 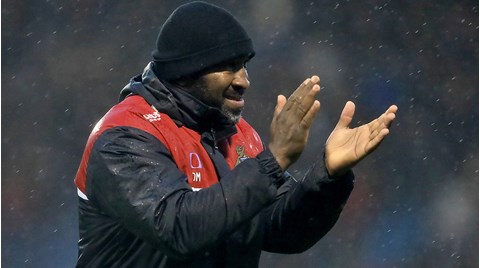 Rovers played the best part of an hour with 10 men following a Fejiri Okenabirhie red card, and Moore believes the commitment shown by his side was deserving of at least a point.

He said: “It’s a bizarre loss really, the conditions were hard but the way we came down here and set out our stall gives me no complaints. I thought the boys performed excellently against a difficult side to play against.

“We had a lot of control for large parts of the game, the red card we can have no complaints with really, but the dominance we had is an absolute testament to the players out there, we’re just disappointed we couldn’t get that equaliser.

“I made a point of going over to the fans before the game to applaud them, and I made sure I went over again at full time, to sincerely thank them for their tremendous support. I know while they’ll be upset with the result, they’ll have seen the commitment.”

Rovers now have a full week of work ahead before they head on another away trip, this time to Shrewsbury Town, and Moore is looking forward to putting in the minutes on the training ground.

He added: “In terms of the performance, the desire and the commitment shown by the players, the willingness to stand up and put their bodies on the line, is really rewarding for me,.

“I’m really pleased we have a full week to work with the squad now, those midweek fixtures are off for a little bit, so we can really get some hard graft in, and I think that will stand us in good stead going forward.

“We move on quickly and look towards the Shrewsbury game, I don’t see any reason why we can’t look to go on a run - slowly but surely we’ll try to head in the right direction.”