Darren Moore believes his side will learn valuable lessons from victory over Bolton Wanderers. 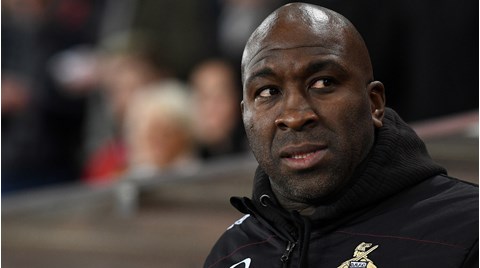 Rovers dominated the opening half and probably should have been out of sight by half-time but Bolton stayed in the game and a defensive error from Rovers in the second half allowed the league’s bottom placed team back into the game.

“Over the course of the game, looking back at it, I think we’ve done enough to get the three points. It was a game of two halves, I thought in the first we were excellent,” he said.

Darren Moore believes his side will learn valuable lessons from victory over Bolton Wanderers.

“The way we moved the ball around, the pictures, the ideas and the movement, we caused them real problems. If I had a critique for the first half, we felt we could have been out of sight by half time.

“We know their goal was an error by us and it presented them with an opportunity to get back in the game.”

A rare error by Seny Dieng gifted the visitors a goal just before the hour mark but Moore believes his keeper will have learned from the mistake and will become a better player for it.

“Let’s not get away from it, their goal was an error by us but we’ll learn from that,” he added.

“We were a bit jittery after that – but the biggest thing from me is that we’ve got the three points and we’ve learned from that mistake. So they can look at it, having gained a win but also learned valuable lessons.

“Seny’s done tremendously for us. I hear massive roars and cheers when he comes and collects those crosses and I can show people umpteen clips where we’ve scored from moves that he’s started at the back. It’s one error and he will learn from it. We’ll get behind him and move on. I won’t allow it to dent his confidence, he’s a good goalkeeper.”

Moore also had an update on Reece James who left the field on a stretcher at the end of the first half.

“He’s sustained a laceration to his shin. We don’t know the extent of it yet, but he’s gone to the hospital,” he said.

“It doesn’t look like a break and we’re hopeful that it’s not but we’ll get clarification of that in the morning.”