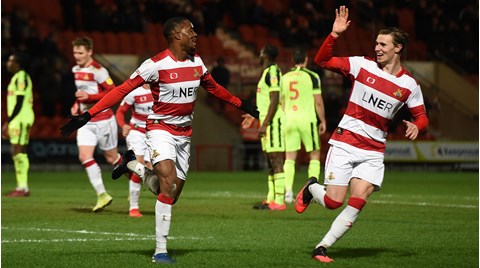 Okenabirhie scored the opener in the 2-1 win over the Trotters in Sky Bet League One and, despite shaky spells at times from Rovers, he says there is a lot to learn more from a vital win.

“It was a good win and it was important to get three points, we wanted to build on last Tuesday and Saturday. It’s a good win, we had to dig in at the end but we held on for the victory,” he said.

“It was one of those things after we got the second goal that the game just felt a bit flat, we made a few mistakes but that’s just part of the game, they had a spell where they put us under pressure but we managed to restrict them.

“We deserved the win but we’ll go away and learn from the performance as well, obviously we’ll make sure that we manage games a lot better butit certainly makes things a lot easier to learn from when we win.”

Okenabirhie’s opener was his second in four games since his arrival from Shrewsbury Town last month, and his first at the Keepmoat Stadium, and he is pleased to have hit the ground running early on.

“It was nice to grab a goal as well, it came after a good team move where I got slipped in by Reece James and took the chance when it came to me, I was happy to see it go in and that gave us a deserved lead,” he added.

“You always want to score as a striker, I’m no different and I’m happy that I’ve been able to contribute. That’s down to the team as well and the way we play, we create chances so it’s good to get off the mark at home now too.

“I’ll always back myself to score when I play and I’m happy that I’ve been able to do that so early during my time here, I’m just hoping that can continue now as we get further into the season.”