New signing Fejiri Okenabirhie says he is looking to kick on after he featured in a Rovers shirt for the first time on Saturday. 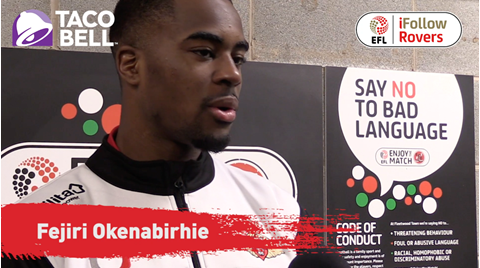 2 February 2020
The forward came on for the final 10 minutes of the game at Fleetwood Town, and feels he is ready to make a big impact in South Yorkshire after making his debut.
“It was a good feeling to get on the pitch, I’m looking forward to the rest of the season now and contributing to the team - I’m settled and I’m looking forward to getting to work on the pitch,” he said.
“I’m ready to get going as a Rovers player, I’m here to do well and this was the only place I wanted to come. It’s a great group of lads and they’ve really welcomed me to the group.
“The gaffer really made me feel wanted and I want to repay that faith in him, I want to be involved and I feel I’m ready to play more - I have to wait for him to pick me but I’m excited to get going.”
Okenabirhie was unable to help Rovers grab a late equaliser as they lost 2-1 at Highbury Stadium in Sky Bet League One, but the new Rovers No.9 is keen to make sure things are put right at Tranmere on Tuesday night.
“We were all disappointed to lose, of course,  I don’t feel like there was that much in the game  but hopefully on Tuesday we can put it right,” he added.
"I was keen to come on and help the team, I thought we could’ve got more out of the second half and on another day we probably would have
“We scored a good goal but they managed to get themselves in front and it was too much in the end. On Tuesday we have to look to go again, we have to look forward and move on quickly."