Rovers U23s side progressed to the knockout stages of the Premier League Cup after a battling 2-2 draw with Exeter City U23s at the Keepmoat Stadium. 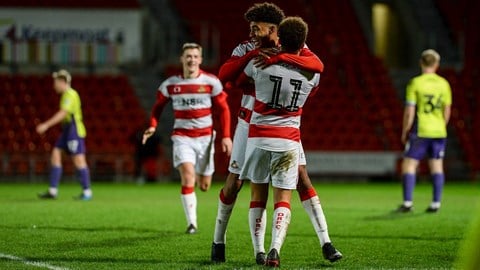 Goals from Myron Gibbons and Jack Watson had put Rovers on course for victory, before Exeter hit back through Alex Hartridge and Harry Kite.

First-team players Alex Baptiste, Matty Blair and Madger Gomes were all included in the starting XI.

The visitors almost went in front with just six minutes gone, as Lewis Wilson forced a good save from Louis Jones with a left footed effort from inside the area.

Jones was called into action again when he parried Josh Key’s shot away from danger, before Wilson fired over after good build-up from the Grecians.

Rovers’ first real chance of the half came when Rieves Boocock found strike partner Watson, who curled just over from 25 yards out.

Gary McSheffrey’s side made the breakthrough just before half-time, as Gibbons raced onto a through ball and fired beyond Jared Thompson into the far corner of the net.

Exeter almost levelled inside the opening five minutes of the second-half, as Jones did well to tip over a deflected effort from Hartridge.

Rovers doubled their lead just before the hour-mark, after a well worked set-piece routine between AJ Greaves and Branden Horton saw the latter find Watson in the area, and he finished expertly from 12 yards out.

It didn’t take long after that for Exeter to find a route back into the game and it came when captain Hartridge headed home from a corner on 64 minutes.

The visitors made it two goals in as many second-half minutes when Kite fired home from just outside the area to level the scores.

They almost won the game when Key’s brilliant effort from distance cannoned back off the crossbar and away from goal meaning the spoils were shared.