The Killers have added a new date to their 2020 Imploding The Mirage stadium tour, with a show at the Keepmoat Stadium now kicking off the tour on Tuesday May 26. Tickets for the Doncaster show will go on sale this Friday, February 21, at 9am. 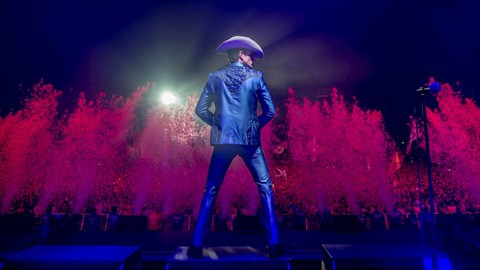 17 February 2020
The Killers, whose most recent UK sojourn was their spectacular Glastonbury 2019 headline set, sold out the initial run of 250,000 tickets for the Imploding The Mirage stadium tour in just two hours upon going on sale late last year. Additional dates were added at London’s Emirates Stadium and Dublin Malahide Castle.
Fans are reminded to only buy tickets from official advertised agents and advised to use Twickets as a resale platform if necessary. Twickets is an ethical ticket resale marketplace, enabling fans to sell spare tickets at face value or less.
The upcoming tour dates will accompany the release of the band’s much anticipated new album, Imploding The Mirage, this spring. The Killers will be joined by special guests Blossoms at the show.
Tickets will go on sale from Friday on www.ticketmaster.co.uk and www.gigsandtours.com. Hospitality and accesible seating will be available from the Club Doncaster Box Office.