Fejiri Okenabirhie says he was convinced to join Rovers by the long-term vision of manager Darren Moore. 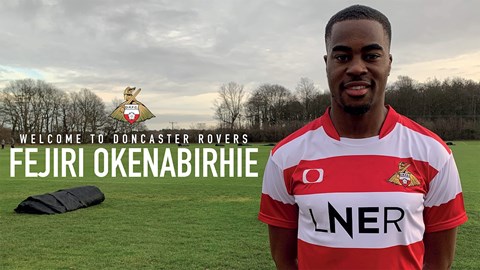 30 January 2020
The striker completed a permanent switch to South Yorkshire on Thursday, and says he wanted to be part of the team being built at the club.
He said: “I spoke to the manager about his ideas and how he saw me fitting in, there’s something he’s building here that I wanted to be a part of.
“He told me about how he wants to play, I’ve seen Rovers as well this season and the style of play suits me. Hopefully I can get some goals to help the team.”
Okenabirhie was top scorer at Shrewsbury Town in 2018/19, with 16 goals, and has his sights set on helping Rovers push for promotion.
He added: “I just want to contribute to a team that are already doing well, adding my attributes to the squad. We’re just outside the play-offs and hopefully we want to break into the top six.
“I like scoring goals, finishing is my best attribute so hopefully I can get a few while I’m here - I like scoring goals. I did that for a season-and-a-half at Shrewsbury, I’m ready to do the same thing here.”