Darren Moore says James Coppinger will be instrumental to the upcoming season after the 39-year-old put pen to paper on a new one-year deal.

Coppinger has committed himself to Rovers for the 17th and final season and Moore believes the midfielder will continue to be instrumental for the team.

“I’m absolutely delighted that Copps has signed for another year. He is Doncaster Rovers through and through,” said Moore.

“He wants to continue his career, he’s enjoying his football and he has the thirst and the hunger to continue into the new campaign. He will be instrumental again for us this season. 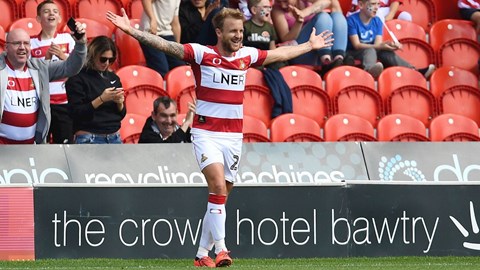 “It’s about us keeping James fit – looking after him and protecting him – because we know when he’s fresh, he’s an asset for us on the football pitch.”

Rovers have a young squad and Moore believes that Coppinger will continue to be an important role model for current players and any players coming into the club.

“His off the field duties around the club are exemplary and he’s a role model for any young professional entering the world of football,” Moore added.

“Copps’ experience – you can’t buy that. He conducts himself in the right way off the field and he’s someone who is being an asset on the pitch. It’s a great signing for the football club and one we should all be happy about.”