Danny Amos said he was pleased to reward Darren Moore’s faith in him after he helped Rovers to a 3-1 win over Wycombe Wanderers in Sky Bet League One. 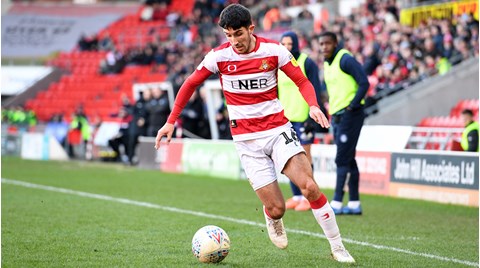 Amos started his first league game of the season in the victory at the Keepmoat Stadium, and the left back was happy to be involved in helping Rovers to three points.

“I found out I’d be starting a couple hours before the game and as soon as I knew I was in I just wanted to crack on with it, all the lads really helped me out, so did the gaffer and the coaching staff in the build up to kick-off,” he said.

“As soon as the whistle went I was on it, I was in game mode, ready to go, and I feel like I did alright out there, I’m just happy I was able to help the boys towards a big three points, hopefully the win will give us a big boost.

“With Reece James being injured I sort of knew I was in the manager’s eye line to come in and maybe replace him, all I’ve kept doing is work hard to prove he can rely on me, and I’m glad he’s put his faith in me and I’ve been able to help us get a good result.”

Rovers’ win over the Chairboys has seen them move to within six points of the League One play-offs, and Amos feels victory over a team currently lying in those play-off places was just what they deserved on Saturday.

He added: “It was a brilliant win from us, and to be honest I don’t think we can ask for too much more, I thought we deserved to go in to the break ahead, we knew they’d come out fighting after the break, but we didn’t panic when they got back into it.

“All the lads were buzzing in the changing room too at full time, we’ve just gone an taken three points off a team that were third in the league, and I feel like we owed them one after losing so late on at their place earlier on in the season.

“I knew that we’d be able to go back in front, and to get the third goal as well to kill the game off and take it away from them, that was crucial for us to be able to do that, so I’m buzzing with the win and the performance.”